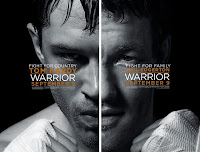 Last night I took in an advanced screening of a movie coming out on September 9th called "Warrior". Last year, if you remember, one of my favorite movies of the year was "The Fighter", and after seeing the trailer for this movie, I figured it was along those lines.

Trust me when I say this movie is "The Fighter" and more! The story of two estranged brothers - Tommy, a Marine dealing with the demons of the past and war, and his older brother, Brendan, a high school physics teacher struggling to help his family survive. They both enter into a MMA (mixed martial arts) tournament for different reasons and this movie packs one heck of a punch. There isn't much that I can say about it right now, as it is still a few weeks from release. But what I can tell you, without a doubt, go see this movie. Beyond the fighting in the cage, see this movie for the heart that it has and the incredible acting from Joel Edgerton and Tom Hardy. (With supporting cast of Nick Nolte and Jennifer Morrison.)