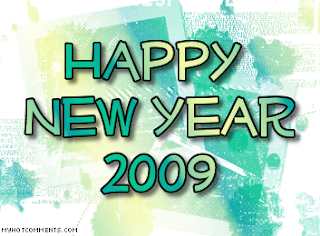 Here is to a BEAUTIFUL and ADVENTUROUS New Year!!
Posted by Michelle at 9:07 PM No comments:

Another Christmas wrapped up!

Christmas came and went in a flash. It was a nice, quiet day! That was perfect! Now I am on my forced vacation for the week (our company decided to close for the week) and wish I was back at work. (Yes, I did just say that!)

Does everyone have their resolutions in place for tomorrow night?
Are your noise makers ready to sound off at midnight?
I can't believe another year has come already! Time flies, doesn't it?
Posted by Michelle at 7:24 PM No comments:

One of the special people in my life turned me on to this blog last year around this time of the yar -- Christine Kante. The post in particular that she wanted me to read was this one -- Resolution Revolution. What she wrote made sense to me. You can make a lot of resolutions, but if you put everything to a common theme to fall back on then you have a better chance of succeeding.

The word that I am choosing for 2009 is adventure. I have resolutions, of course. I have a complex set of resolutions, quite honestly. I have resolutions that are being done to bring about a very positive and long lasting change to my life, but I think that the key that unlocks all the resolutions will be that word of mine. Adventure. The adventure it will take to bring them all about. I hope you all check out that link and find your own word for the year as well and succeed in making that word work for you.

Tonight was the yearly trip to the Temple in Mesa to see the lights. Of course, going with my dad means that you walk briskly through the Temple grounds and be done in 30-45 minutes tops. It was a bit chilly out tonight, but it was a beautiful one. (And very crowded!) 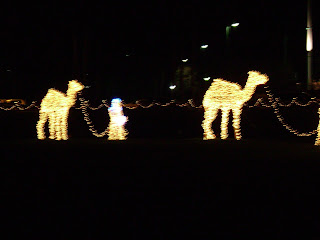 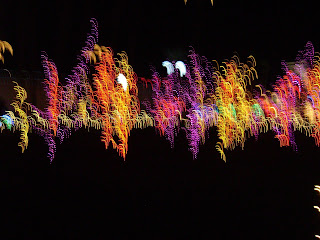 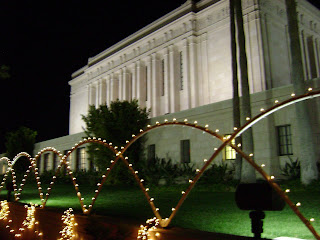 The grouchiest elf you ever saw... 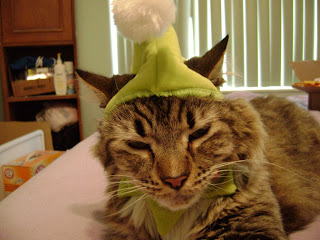 Sometimes it just has to happen...Tyson has to suffer for me to have a good laugh.
Posted by Michelle at 9:10 AM 2 comments: 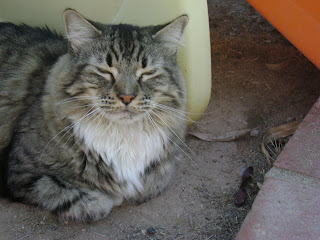 Tyson has become quite the pro at using the dog door. He still slinks around outside, Jeremy calls him a lowrider.

Christmas is coming up so quick!! 15 days away! I still need to get Jeremy's present bought! And I need to wrap! And I need to decorate my room (will do that this weekend). I need to put the cards in the mail (they are, at least, stamped). I need to bake! I need to see "A Christmas Story" still. (You'll shoot your eye out!!)

Are you all ready?
Posted by Michelle at 6:32 PM 2 comments: 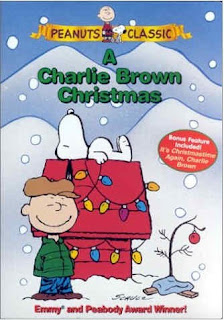 Yes, Christmas can get under way now.
A Charlie Brown Christmas has been viewed!!
Posted by Michelle at 7:14 PM 3 comments: 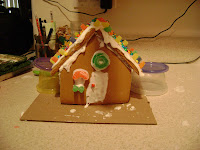 Well that was not an experiment I think I will be repeating anytime soon...
A crooked little shack that got hit by an avalanche.
Posted by Michelle at 4:04 PM 5 comments:

In the meadow we can build a snowman... 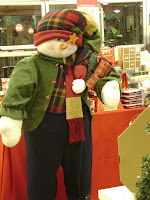 How cute is he? And he is as tall as me! Love me some snowmen!
Posted by Michelle at 8:11 PM No comments: 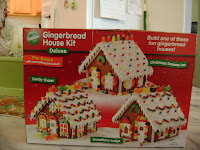 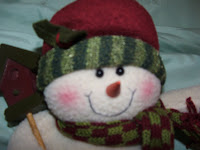 A new snowman to add to the multitudes of snowmen that I already own! Whoot!
And I am going to attempt to make a gingerbread house (and a wreath) this weekend. Okay, seriously, it may end up looking like a hillbilly shack that got obliterated by an avalanche...I never claimed I was that crafty!

My wreath will have penguins on it. Minae would be muttering about "those damn penguins" if she could see it. Pictures of all this to follow...hopefully...
Posted by Michelle at 3:49 PM 2 comments:

Today is a day of change.

I'm not a very political person. I rarely discuss politics as I feel I come off too stupid to be able to comment about much. I have followed the Presidential race the best I can and tried to understand everything being discussed this time. This country is in need of a change, however, and this year was more important than any to make sure you did your God given right and get out there and vote.

And vote I did! The boss got a little grumpy over it as she wanted me to run a FedEx errand, but I was not going to let someone give me an option that sounded more fun than going and standing in that line with the rest of my fellow American's and voting for the change we want to see happen.

I stood in line for a little over an hour and I voted for the candidate that I felt was going to be able to provide this country with hope for better days. I hope he wins and does as he promised.

No matter who you vote for today, be sure you do it.

Just. Vote.
Posted by Michelle at 6:27 PM No comments: 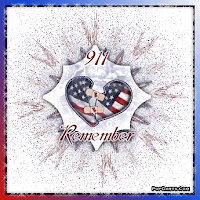 How do you properly convey in words what happened seven years ago today? How many words can you use to express your feelings over what you felt that morning of September 11, 2001? Shock, horror, terror, sadness, grief. And yet none of those words seem to encompass what the true feelings of the day were. I am sure every single one of us remember where exactly we were when we heard the news. I was driving to work. And I remember thinking how sad that a plane crashed into the first tower of the World Trade Center. At the moment it was just the one plane and, of course, it was thought to be an accident. Then the second plane crashed and I remember the shock as I got out of my car and went rushing through the warehouse to get to my desk so I could turn the radio on, telling people as I went what was going on. All day we listened to that radio at work, all night I numbly watched the reports over and over again on the news reports. I watched and I cried. I had to physically force myself to turn the television off so I would quit watching the horror unfold in front of me. For the following six years this day has never been easy to remember. It instantly takes you back to that moment and you think about it all over again.

After a touching tribute on the radio today, someone called the station and said while it was horrific what happened, do we really need to relive this situation every year? I think the answer is yes. Over 2,000 innocent people died that day in our country. Citizens of this country, visitors, people going to work, people working to save those that were injured and trapped. We need to remember. We need to remember that something this terrifying can happen again. We need to remember the days immediately following the act where you embraced the people in your life. Because it shouldn't take such a senseless act of terrorism to make you honor the people you have in your life and tell them you love them.

There are really no words to offer for today that haven't been said a million times by hundreds of people that can put it more eloquently than me. Just take a moment to remember and pay respect to those that lost their lives.
Posted by Michelle at 8:27 PM No comments: 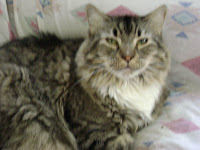 The arrogance of the cat is just astounding. He stares at me, knowing he is in trouble with that little "ha" look of his. Meet Tyson.
Posted by Michelle at 5:27 PM 1 comment: